10 THINGS TO DO ON YOUR FIRST TRIP TO ROME

10 THINGS TO DO ON YOUR FIRST TRIP TO ROME
Travonto.com Team
Travonto.com Team
Travonto.com Team
https://d3dy06k3lpjrq5.cloudfront.net/blog-category/3/social_static_0d89b572d02c02e58bd260f2f47d8caa_7674.jpg
2020-02-03 10:34:53
From the moment your plane lands in the airport, you can tell this trip is going to be something special. Seeing Rome for the first time, cast in the golden glow of the setting sun, is nothing short of magical. And that is only the beginning, everything that is to follow will only continue to exceed your expectations.

If this is your first time in Rome, you’re probably wondering what, of the massive list of things to do and see in this beautiful, historic city, is actually worth doing. The short answer is all of it, but unless you’ve got weeks to spare, you’ll probably have to make some choices. For first-timers to the city, and those interested in discovering the centuries of history embedded here, we would recommend including the following 10 things on your Rome itinerary! 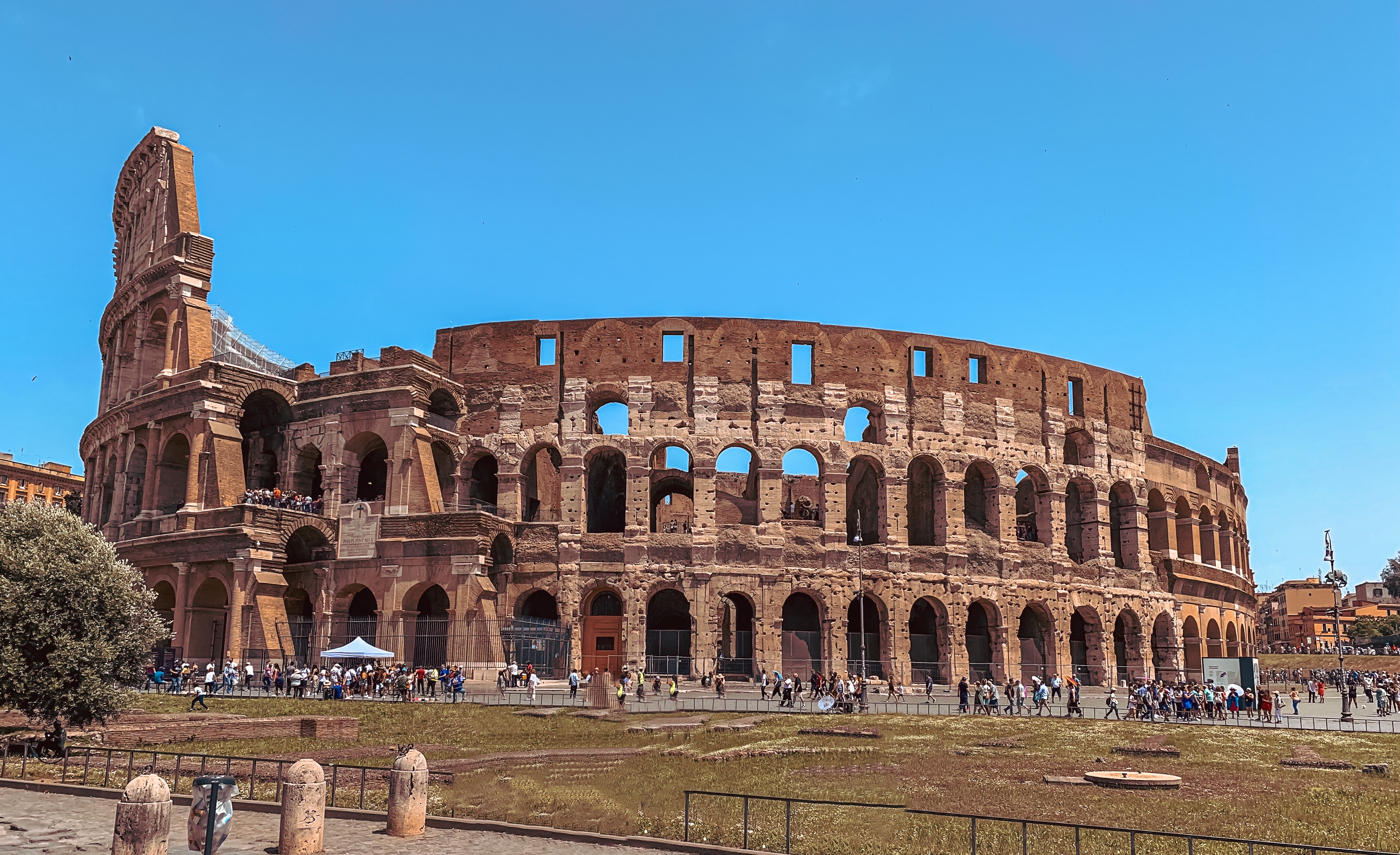 TAKE A TOUR OF THE COLOSSEUM

Seeing as you can’t actually stand in the middle of the Colosseum anymore, you’ll probably have to reenact your favorite Gladiator scenes somewhere else, but definitely don’t miss seeing the Colosseum.

Used for entertainment (most often of the gory, one-of-us-is-going-die-today type), the Colosseum is the largest and most well-preserved amphitheater from the Roman Empire. Seeing this epic piece of history with your own eyes is an absolute must-do in Rome.

The cheapest way to visit is to purchase a standard ticket that will gain you entrance into the Colosseum and the Roman Forum and Palatine Hill nearby. If you’ve got the time and are willing to pay a few extra bucks, though, the very best way to visit the Colosseum is on a guided tour. You’ll get to see places standard ticket holders don’t have access to. Plus, nothing quite brings the history made here to life like having someone skilled in the art of story-telling walking you through it. 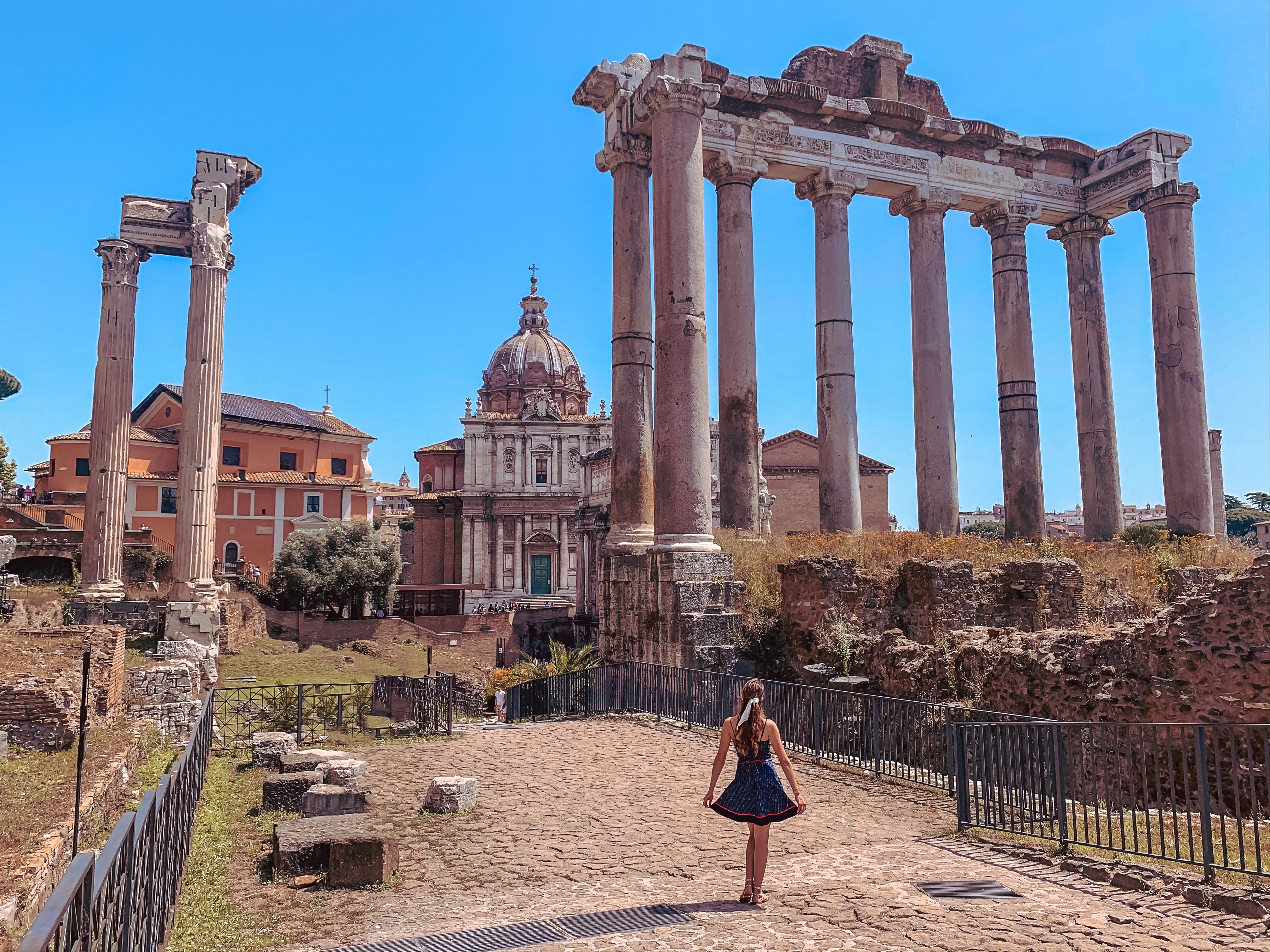 WALK THROUGH THE RUINS AT THE ROMAN FORUM & PALATINE HILL

Your ticket for the Colosseum also gets you into a few additional sights including the Roman Forum and Palatine Hill. Tickets are valid for two consecutive days, so you don’t have to try to pack all three sights into the same day. (I actually recommend you don’t unless you have to. That would be an exhausting day!)

Tip: If you didn’t purchase your tickets online, queues for tickets are far shorter at the ticket booth at Palatine Hill than at the Colosseum, so buy your tickets there!

Palatine Hill is well-known for being the site of the first settlement in Rome, dating all the way back to the 8th century BC. The Roman Forum is a large plaza beneath the hill which was once the center of daily life in Rome and housed some of the city’s most important buildings and structures. What’s left today are only bits and pieces of what was once a gleaming white, prosperous city, but it’s still a fascinating glimpse into early Roman life.

For your visit, we suggest either hiring a guide or at the very least printing a written one from the internet so you’ll have an idea of what you’re looking at. Otherwise, you’ll just be walking through lots of famous ruins, which is still cool, but doesn’t provide a lot of context. 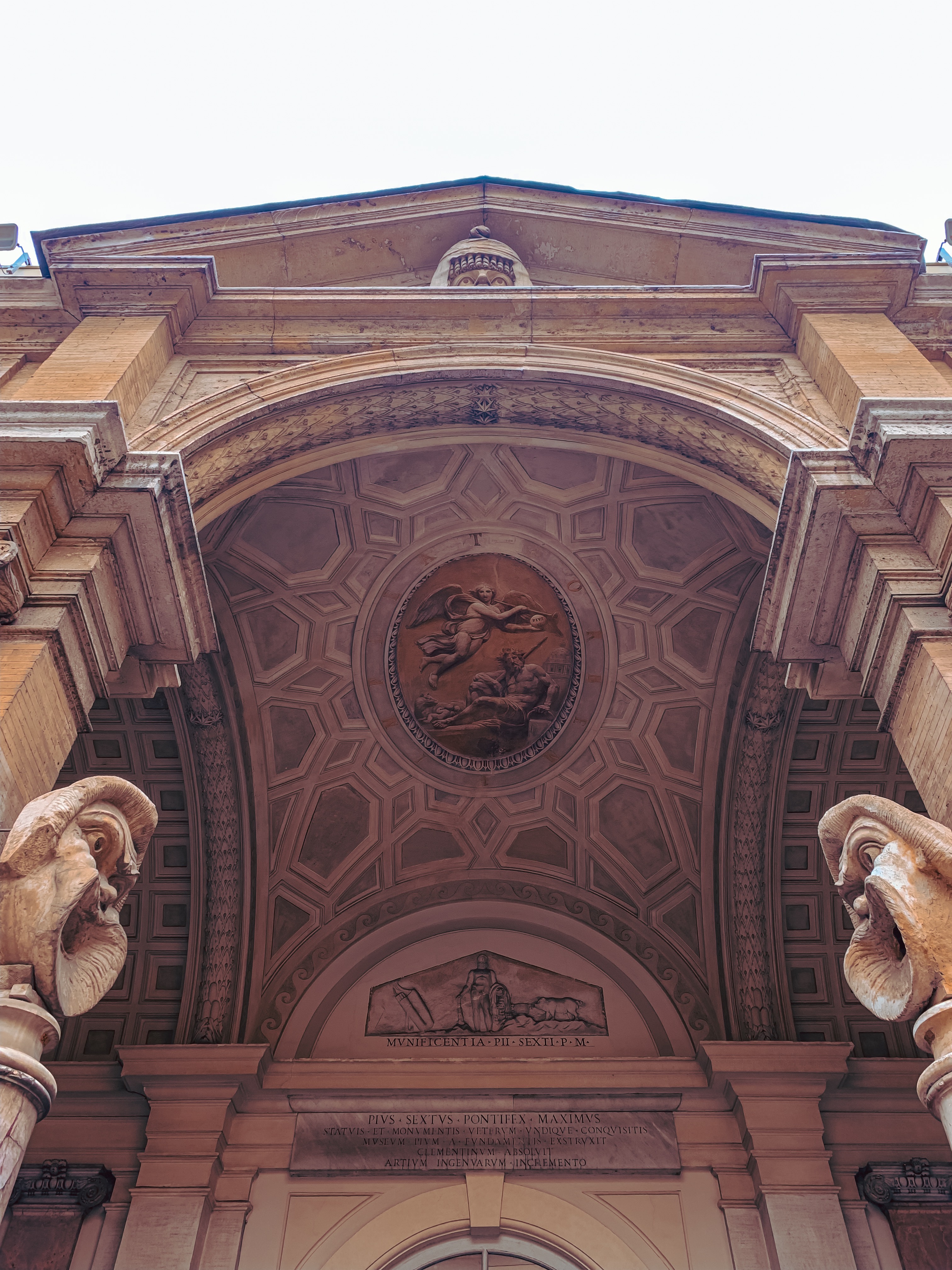 EXPLORE THE MASTERPIECES INSIDE THE VATICAN MUSEUMS

The famous spiral staircase, the papal throne, the Gallery of Maps, the Sistine Chapel.

If the opportunity to take in the beauty of the Sistine Chapel’s ceiling, possibly the most famous work of art ever, doesn’t convince you to visit the Vatican Museums, nothing will. There are 54 different galleries and several courtyards within the Vatican Museums, each featuring carefully chosen paintings and sculptures collected by centuries of popes. Like the Louvre in Paris, the Vatican Museums contain more priceless works of art than can be seen in a day, but if you give yourself around three hours, you’ll still be able to see the museums’ most famous bits. Of all the places we visited in Rome, the Vatican Museums were the busiest, so if possible we recommend starting your day here and being in the queue for the museum when it opens at 9am. 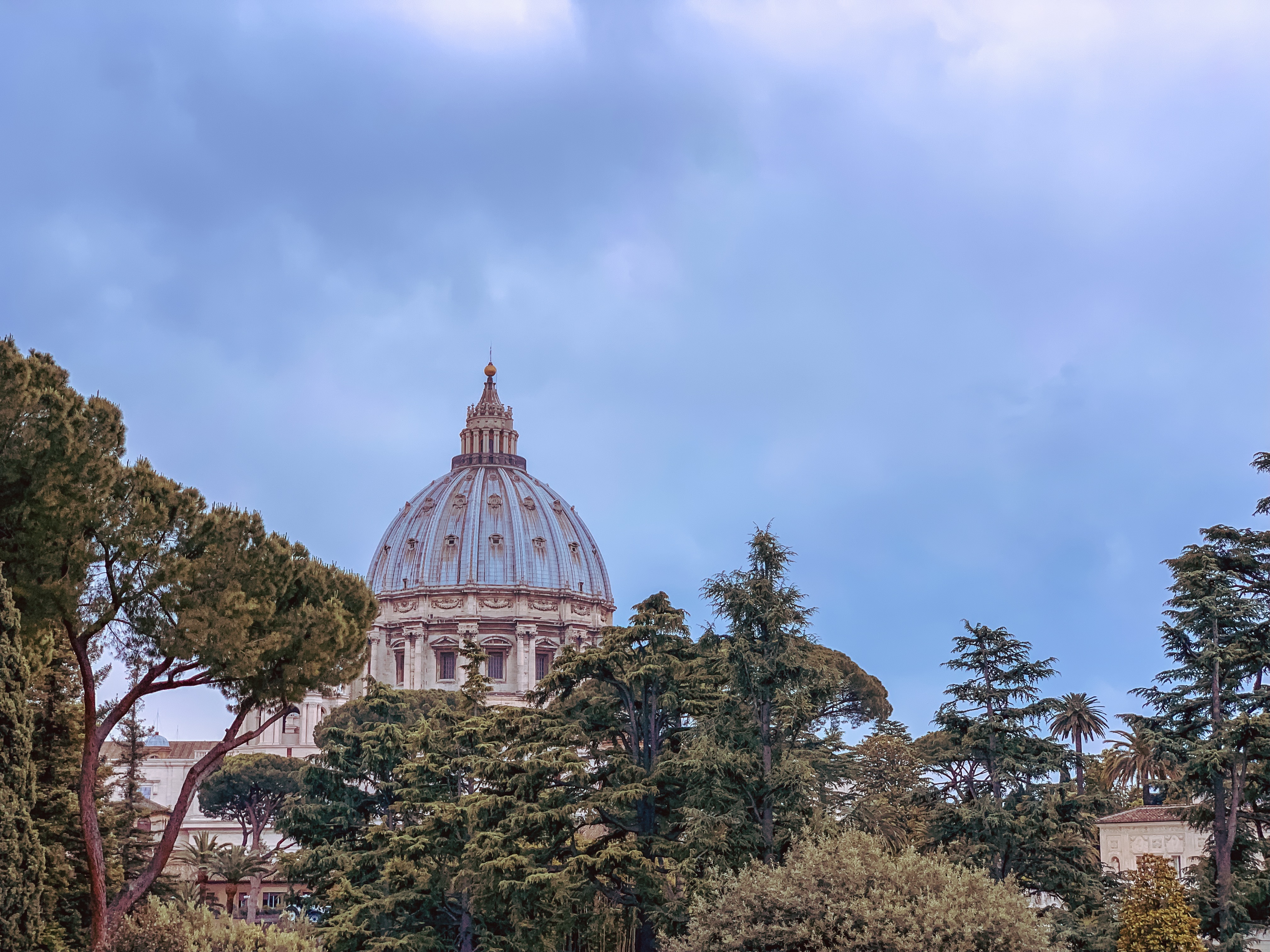 Like the Vatican Museums, you’ll find St Peter’s Basilica within the religious city-state of Vatican City. (That there is a small country within the city of Rome itself still sort of blows my mind!) St Peter’s Basilica is the largest church in the world, and also the burial site of Saint Peter, one of Jesus’ apostles and whom those of the Catholic faith consider to be the first pope.

Entrance into St Peter’s Basilica is free, but if you want to climb the stairs to the top of the basilica’s dome, there is a small fee. (This is a great way to see the city of Rome from above, though!) 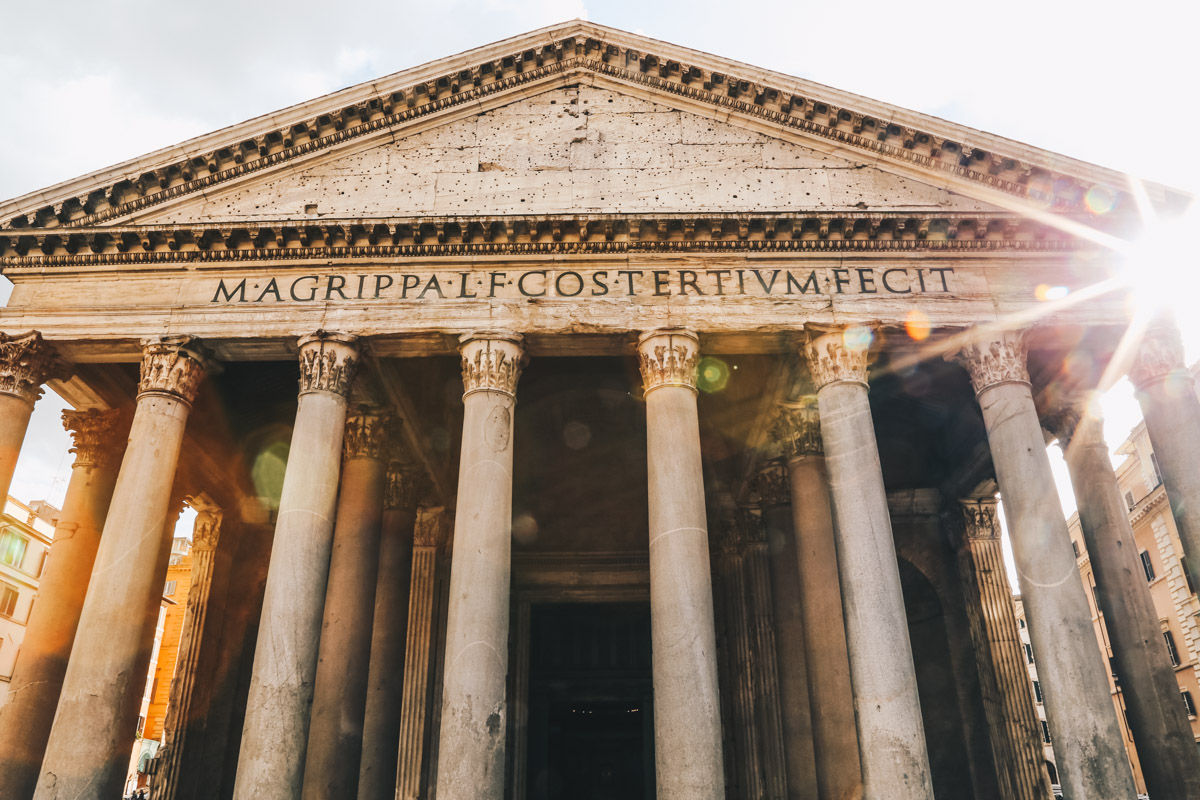 STAND BENEATH THE PANTHEON’S FAMOUS DOME

Thanks to the more modern buildings that now stand beside it, the Pantheon, one of Rome’s most famous former temples, almost looks a little out of place when you turn the corner and see it sitting there in the square with gelato shops and fast food joints just steps away.

Even still, once you step inside and gaze upward at the Pantheon’s grand concrete dome, it’s easy to be transported back in time. Located in the Piazza della Rotonda, the Pantheon is in surprisingly good condition in comparison to its equally ancient counterparts. No longer a temple, the Pantheon has served as a church since the 7th century.

Entrance is free, but the Pantheon is closed to tourists during weekly mass. (However, if you’re interested in attending mass, I believe you will be allowed in, but obviously no pictures are allowed.) 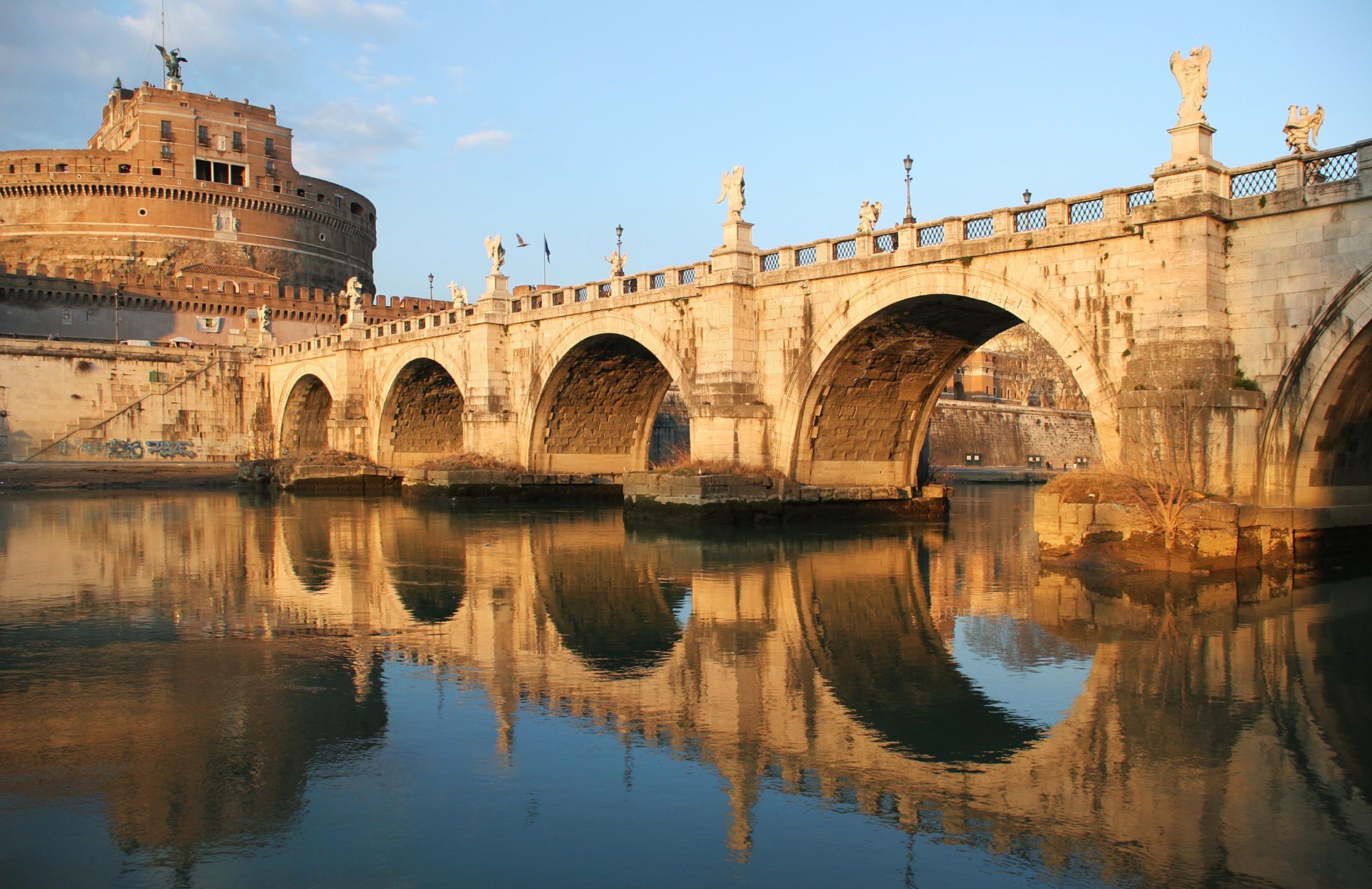 GO FOR A WALK ALONG THE RIVER TIBER

While it is possible to take a leisurely walk through the city, you’ll find far less people and a more peaceful setting along the banks of the Tiber.

If you’re looking to escape the traffic, we recommend walking the Tiber on the wide bike and walking path on the western bank of the river, accessible via steps down to the riverbanks at any of the bridges that cross the river. Besides several bridges, murals, and colorful buildings that line the river, you’ll also be able to spot the dome of St Peter’s from along this route. Sunset makes for the most scenic time for a walk, but any time of day would be pleasant, assuming the temperatures haven’t reached scorching levels yet. 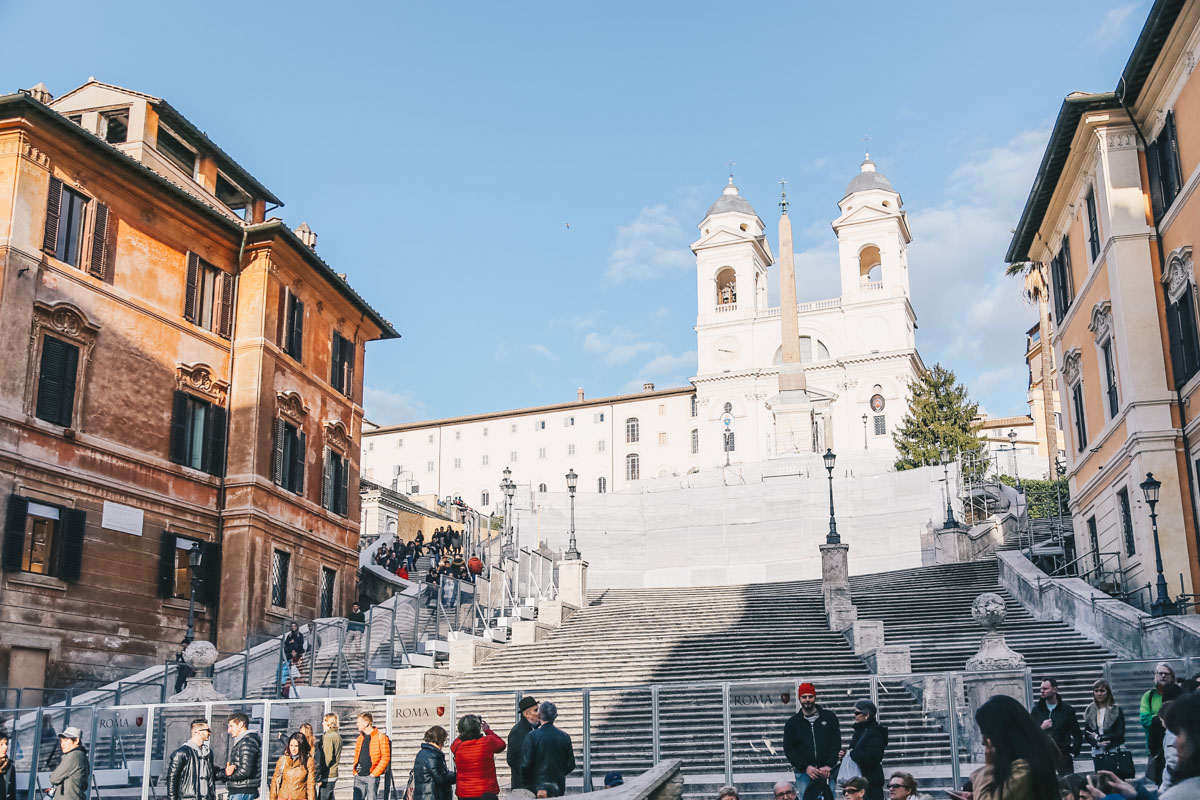 SIT ON THE SPANISH STEPS

One of the best places in Rome to rest your legs for a bit and soak up all the Italian atmosphere is the Spanish Steps. Located in the heart of the city, these 135 steps connecting the Piazza di Spagna below with the Piazza Trinità dei Monti above have been attracting artists, filmmakers, and visitors to Rome for almost 300 years now. At least when they aren’t completely blocked off for restoration, anyway, which was the unfortunate case when we visited. The steps have since reopened and are now as gleaming white as the Trinità dei Monti church that rises above them! 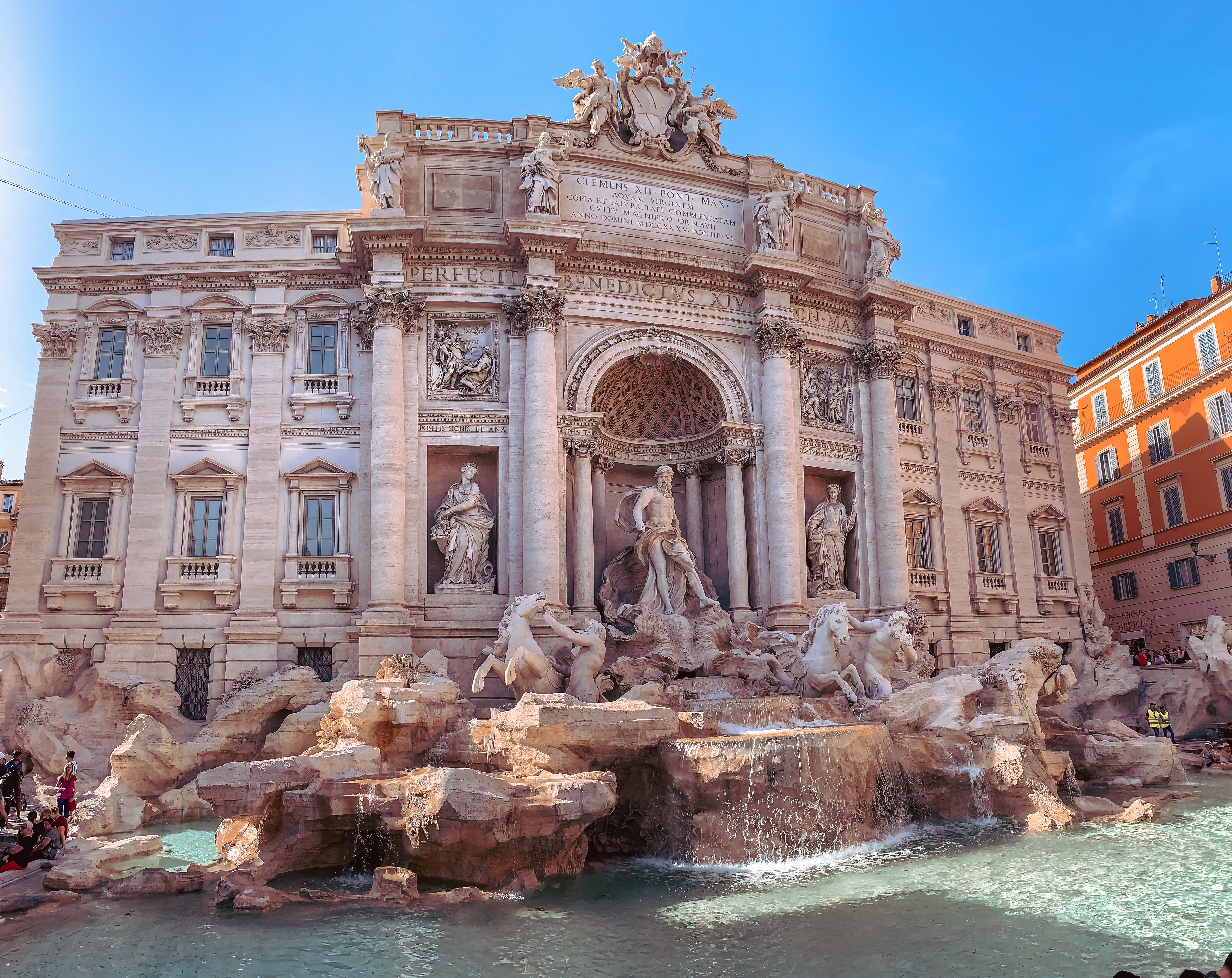 TOSS A COIN INTO THE TREVI FOUNTAIN

But make sure you do it the right way!

The Trevi Fountain, the largest fountain in Rome, is probably most well-known for the unique superstition and traditions surrounding it. Supposedly, if you toss a coin with your right hand over your left shoulder, you’ll be destined to return to Rome someday. If you want to take it a step further, you can throw three coins over your shoulder – one ensuring your inevitable return to Rome, another promising you’ll find love, and the third that your love will lead to marriage.

If you’re thinking that sounds like a freaking lot of coins being tossed into a fountain, you’re right. Around €3,000 is collected from the fountain every evening and donated to a non-profit providing food to the homeless in Rome. The area surrounding the Trevi Fountain stays super busy pretty much all day long, but if you visit at early morning or after dark, you’ll be able to toss your coin(s) in the fountain without fear of being flicked in the head by everyone else’s coins. 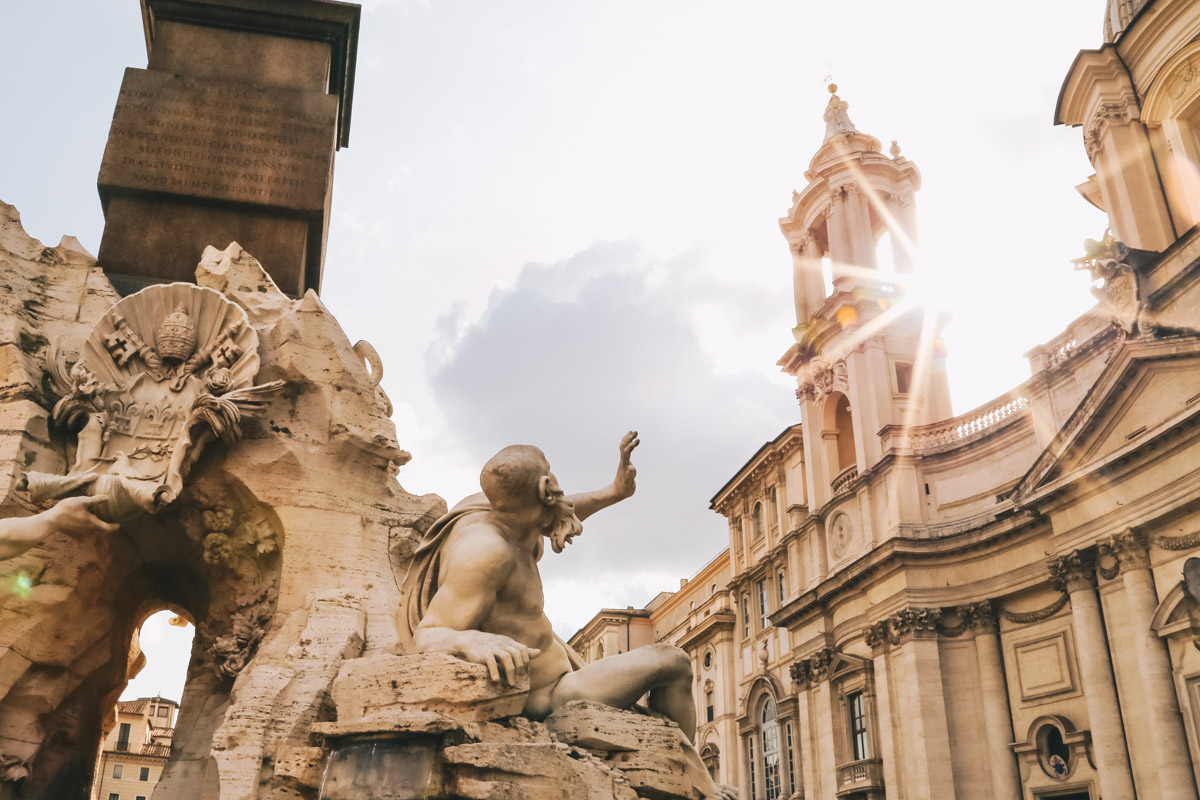 PEOPLE WATCH IN THE PIAZZAS

The city of Rome is built around its piazzas, aka public squares that aren’t necessarily shaped like squares. These beautiful gathering places found around nearly every corner in the city center often feature famous landmarks and monuments, but they are also perfect spots for doing a little people watching. 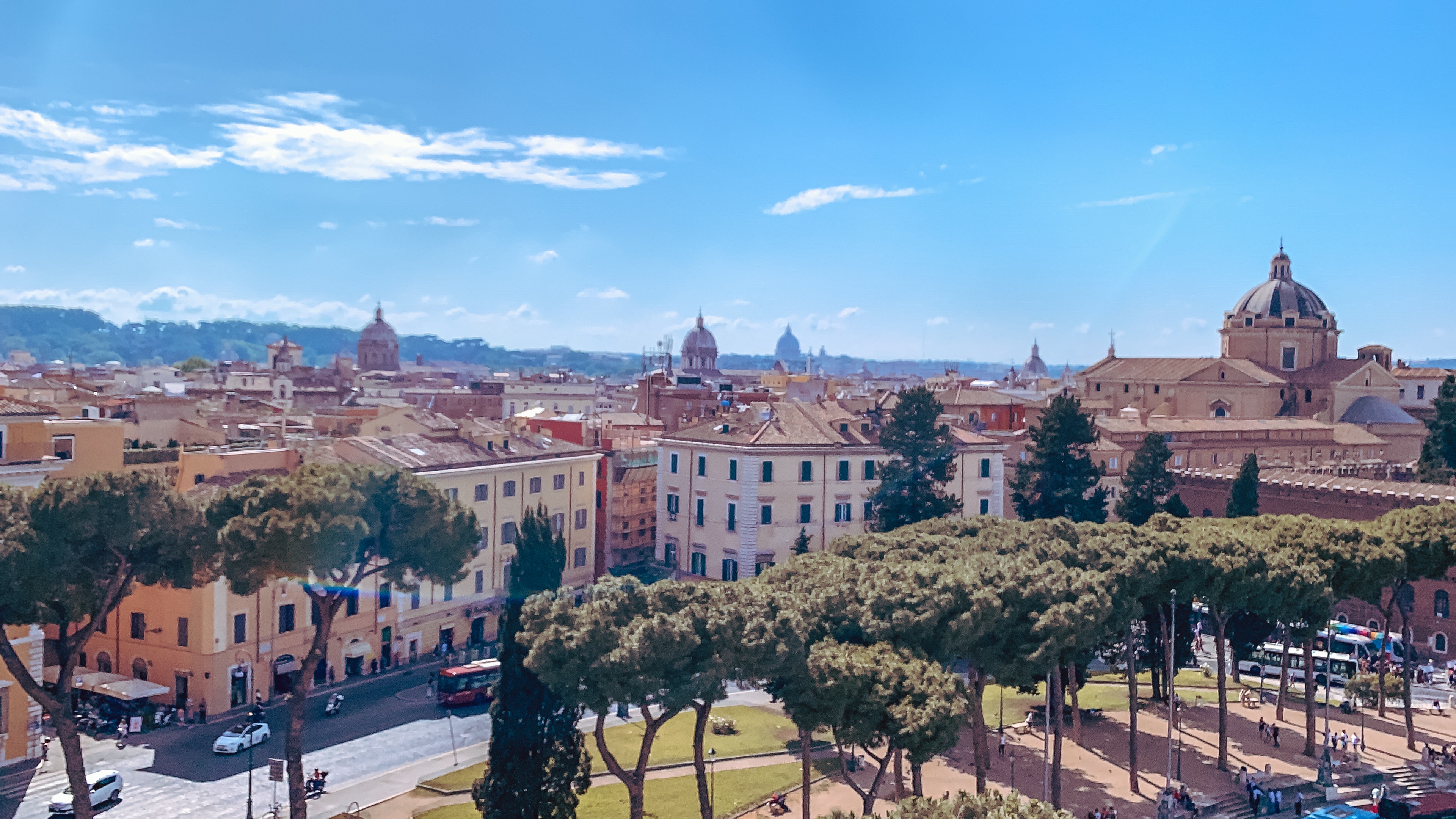 CATCH A SUNSET FROM PINCIO TERRACE BY VILLA BORGHESE

For the very best (free) view in the city at sunset, head directly to the Pincio Terrace beside Villa Borghese. The terrace sits high above the Piazza del Popolo below and from here you’ll have sweeping views of the historic city center all the way to Vatican City. Watching the sunset behind the dome of St Peter’s while being serenaded with Italian tunes by the buskers that play here every evening will certainly make for a sunset you won’t soon forget. You can access Pincio Terrace from Villa Borghese or via the steps leading up to it from the piazza below.

To secure a spot along the front of the terrace, arrive about an hour before sunset. (This way you can see all the changing sky colors as the sunset gradually deepens before disappearing completely, too!) Since this is a popular spot for tourists, expect to be approached fairly often by people selling different things.

All these places can be found on Travonto when you plan your trip to Rome, so why not give it a try and plan your best journey to such a beautiful place like Rome!