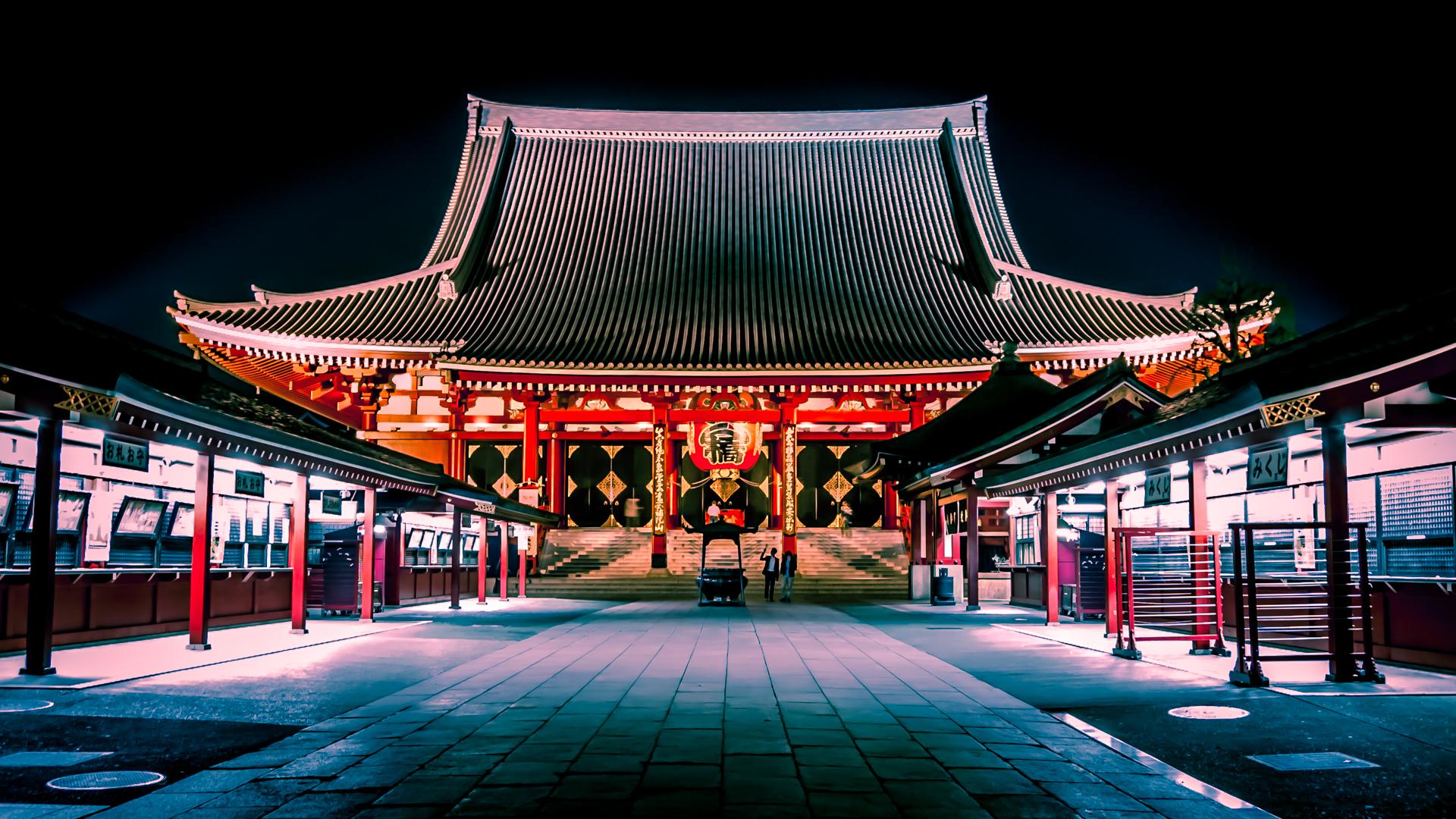 Sensō-ji 金龍山浅草寺, is Tokyo’s largest ancient Buddhist temple and a major Tokyo attractions for Japanese and foreigners located in Asakusa.

The temple is dedicated to the Bodhisattva Kannon, also known as Guan Yin or the Goddess of Mercy.

It is Tokyo’s oldest temple, and one of its most significant. Formerly associated with the Tendai sect, it became independent after World War II.

Located just before Sensoji after Kaminarimon or “Thunder Gate”, a massive paper lantern dramatically painted in vivid red-and-black tones to suggest thunderclouds and lightning, Nakamise is one of the oldest shopping centers in Japan.

Apart from typical Japanese souvenirs such as yukata, keychains and folding fans, various traditional local snacks from the Asakusa area are sold along the Nakamise.

Meiji Shrine 明治神宮, is the Shinto shrine that is dedicated to the deified spirits of Emperor Meiji and his wife, Empress Shōken.

To pay respect : At a Torii (shrine archway): Bow once when entering and leaving.

At the Main Shrine building :  Bow twice. Clap your hands twice. Make a wish if you like & Bow once again.

Tokyo Imperial Palace 皇居 is the main residence of the Emperor of Japan. Except on Jan 2 (New Year’s Greeting) and Dec 23 (Emperor’s Birthday), the palace buildings and inner gardens are not open to the public .

Only on both specific dates, visitors are able to enter the inner palace grounds and see the members of the Imperial Family, who make several public appearances on a balcony.

The Imperial Palace East Gardens 皇居東御苑, are a part of the inner palace area and are open to the public.

Tsukiji Market 築地市場, is the biggest wholesale fish and seafood market in the world. It handles more than 400 different types of seafood from cheap seaweed to the most expensive caviar, and from tiny sardines to 300 kg tuna and controversial whale species.

The most interesting part is the Tuna Auction. It is limited to 120 visitors per day. Viewing tickets are issued on a First come, First serve basis beginning at 4:30 AM at the market’s Fish Information Center, located next to the Kachidoki entrance. (Not the main entrance)

Note : To watch Tuna Auction, it is advisable to stay near Ginza area so you can catch a cheaper cab early in the morning. No trains are operating at this hour.

You can also book a Tsukiji Tuna Auction Tour with a Guide during the night.

One of Tokyo’s newest landmark & attraction, the 634 meter Tokyo Skytree is the tallest tower in Japan. The tower is the primary television and radio broadcast site for Kanto region.

The Tokyo Skytree is its two observation decks Tembo Deck & Tembo Gallery which offer spectacular views of Tokyo city skyline. On the base of Tokyo Skytree host a large shopping complex with aquarium.

Tokyo Disneyland is a 115-acre theme park based on the films produced by Walt Disney. It was opened in 1983 as the first Disney theme park outside of the United States.

Tokyo DisneySea, the 4th most-visited theme park in the world is also the 9th park of the 11 worldwide Disney theme parks to open.

Inspired by the myths and legends of the sea, Tokyo DisneySea is made up of seven themed ports of call: Mediterranean Harbor, Mystery Island, Mermaid Lagoon, Arabian Coast, Lost River Delta, Port Discovery and American Waterfront.

Kabukichō (舞伎町 is an entertainment and red-light district in in north east Shinjuku beyond Yasukuni-dōri Avenue.

It is very famous for hostess bars, host bars, love hotels, shops, restaurants, and nightclubs, and is often called the “Sleepless Town” .

The district’s name comes from late-1940s plans to build a kabuki theater: although the theater was never built due to financial difficulties, the name stuck.

The Ginza (銀座) is considered the high fashion center of the city and contains many upscale shops and restaurants.

It is one of the most expensive real estate in the world. During weekend, the street will be closed to motor traffic during the day hence becoming a Pedestrians’ Paradise.

Yasukuni Shrine 靖国神社 is a Shinto shrine dedicated to the soldiers and others who died fighting on behalf of the Emperor of Japan.

When the Emperor Meiji visited Tokyo Shokonsha for the first time in 1874, he composed a poem; “I assure those of you who fought and died for your country that your names will live forever at this shrine in Musashino”.

Akihabara is the largest town collecting all kinds of electronic appliances and devices in the world. The products at the very top of technology are always abundantly available here.

Over here, staffs master 20 languages of the world. Communication here can be going on smoothly without any problems. Customers can easily purchase the overseas model products.

Kabuki-za in Ginza was the principal theater in Tokyo for the traditional kabuki drama form.

It is the only theater in Japan that has shows every month. The building’s design is old and unique, registered as a Tangible Cultural Property by the Agency for cultural affairs in Japanese Government in 2002.

At 332.5 metres (1,091 ft), it is the second tallest artificial structure in Japan. Completed in the year 1958 as a symbol for Japan’s rebirth as a major economic power.

One of the most touching real life story in the world. Hidesaburō Ueno, a professor in University of  Tokyo, took in Hachikō, a golden brown Akita, as a pet. During his owner’s life, Hachikō greeted him at the end of each day at the nearby Shibuya Station.

The pair continued until May 1925, when Professor Ueno did not return. The professor had suffered from a cerebral hemorrhage and died, never returning to the train station where Hachikō was waiting.

Every day for the next nine years the dog waited at Shibuya station. Hachikō died in 1935, and was found on a street in Shibuya.

Eventually, Hachikō’s legendary faithfulness became a national symbol of loyalty, particularly to the person and institution of the Emperor.

Located indoor, it is an all weather park which offers a variety of live performances and attractions.

Note : You can buy bento’s outside of the theme park to save money.

1. KEIO Line : From Shinjuku Station – Take rapid bound train to Hashimoto & get off at Tama Center Station. Walk out of the station go straight till KEIO Plaza Hotel Tama and turn left.

If you want Pokémon goods, Pokémon Center is the place to go!